Multitasking is a lie.

You’re one of the majority who don’t believe this, aren’t you?

We fully expect pilots and surgeons to focus on their jobs to the exclusion of everything else. We expect anyone in their position caught doing otherwise, will always be severely taken to task. We accept no arguments and have no tolerance for anything but total concentration from these professionals.

Would you agree with me – multitasking can even be fatal when lives are at stake?

So why is it, the rest of us live another standard?  Do you not value your job or take it as seriously?  Why would you ever tolerate multitasking when you’re doing your most important work? Just because our day job doesn’t involve bypass surgery shouldn’t make focus any less critical to your success or the success of others. Your work deserves no less respect. 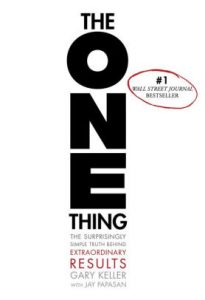 If you’re joining us for the first time on this subject, recall in The Six Lies Between You and Success we shared Gary Keller, author of The ONE Thing: The Surprisingly Simple Truth Behind Extraordinary Results, six lies about success that keep us from living the One Thing:

Don’t believe multitasking is a lie?

Would you drive your vehicle and text on your phone?  Of course not!  This is an extreme or bad example of multi-tasking, isn’t it?  You probably don’t believe speaking on your phone is multitasking either.

In 2009, New York Times reporter Matt Richtel earned a Pulitzer Prize for National Reporting with a series of articles (“Driven to Distraction”) on the dangers of driving while texting or using cell phones. He found that distracted driving is responsible for 16 percent of all traffic fatalities and nearly half a million injuries annually. Even an idle phone conversation when driving takes a 40 percent bite out of your focus, and, surprisingly, can have the same effect as being drunk.

This evidence is so compelling, that many states and municipalities outlaw cell phone use while driving. This makes sense. Though some of us at times have been guilty, we’d never condone it for our teenage kids. All it takes is a text message to turn the family SUV into a deadly, two-ton battering ram. Multitasking can cause more than one type of wreck.

If you don’t believe multitasking is an issue, consider this: Workers who use computers during the day change windows or check e-mail or other programs nearly 37 times an hour.

Being in a distractible setting sets us up to be more distracted. Or maybe it’s the high. Media multitaskers actually experience a thrill with switching—a burst of dopamine—that can be addictive. Without it, they can feel bored. For whatever the reason, the results are unambiguous: multitasking slows us down and makes us ‘slower witted’.

Is this the explanation for why you find most of your co-workers so dull and simple?

In the book, The ONE Thing: The Surprisingly Simple Truth Behind Extraordinary Results by Gary Keller with Jay Papasan, they provide this research example to further underscore the unproductivity of multitasking:

In the summer of 2009, Clifford Nass set out to answer just that. His mission? To find out how well so-called multitaskers multitasked. Nass, a professor at Stanford University, told the New York Times that he had been “in awe” of multitaskers and deemed himself to be a poor one. So he and his team of researchers gave 262 students questionnaires to determine how often they multitasked. They divided their test subjects into two groups of high and low multitaskers and began with the presumption that the frequent multitaskers would perform better. They were wrong. “I was sure they had some secret ability” said Nass. “But it turns out that high multitaskers are suckers for irrelevancy.” They were outperformed on every measure. Although they’d convinced themselves and the world that they were great at it, there was just one problem. To quote Nass, “Multitaskers were just lousy at everything.”

Multitasking is a lie.

It’s a lie because nearly everyone accepts it as an effective thing to do. It’s become so mainstream that people actually think it’s something they should do, and do as often as possible. We not only hear talk about doing it, we even hear talk about getting better at it. More than six million webpages offer answers on how to do it, and career websites list “multitasking” as a skill for employers to target and for prospective hires to list as a strength. Some have gone so far as to be proud of their supposed skill and have adopted it as a way of life. But it’s actually a “way of lie,” for the truth is, multitasking is neither efficient nor effective. In the world of results, it will fail you every time.

“Multitasking is merely the opportunity to screw up more than one thing at a time.” —Steve Uzzell

Keller ends each chapter in One Thing with BIG IDEAS to sum up the chapter.  Here are his three from chapter 5 Multitasking:

In order to be able to put the principle of The ONE Thing to work, you can’t buy into the lie that trying to do two things at once is a good idea. Though multitasking is sometimes possible, it’s never possible to do it effectively.

My good friend, Doug Wick – Gazelles Coach in Cedar Rapids Iowa is the author of this insightful article.